Azerbaijan made its own contribution into the establishment of the culture and civilization. 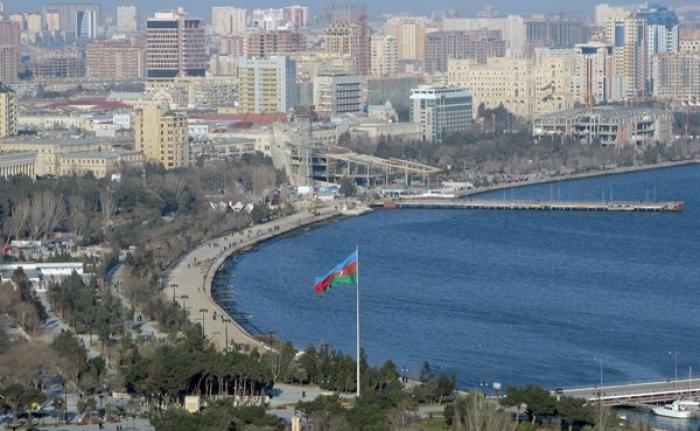 Azerbaijan is a geographical name. On the one hand this name is linked with the population, which lived in this region for thousand of years before our era, and who were mostly fire-worshippers. Local population considered that fire was their God and so they worshipped the fire. "Azer" means fire. The Turkic name "Azer" was used for this territory for a long time. The word "Azer" consists of two parts - "az" and "er". In Turkic languages, "az" means a good intention and a fate of success. Thus, the word "Azer" means "a brave man", "a brave boy", "the fire keeper". The word "Azerbaijan" originates from the name of an ancient Turkish tribe, who resided in those territories.

Azerbaijan is one of the most ancient sites of humankind. The humankind was present here at every stage of their historical development. There were living settlements in Azerbaijan even at the earliest stages of humankind. Azerbaijan made its own contribution into the establishment of the current culture and civilization, progress and dialectics.

The time kept a range of ancient archeological and architectural monuments for us. If you wish to understand Azerbaijan and to know everything about it, you need to look at this country and its people with a friend's eyes.

Azerbaijan is a country of ancient culture. The Oguz tribes which moved here and stayed for ages, have found a deeply rooted culture and in their turn enriched it with Turkic national traditions. The talented and creative powers of our nation are personified in such epic monuments as "Kitabi-Dede Gorgud", "Oguzname" "Keroglu" and many others.

The country of Azerbaijan was immortalized by such talented painters as Sattar Bahlulzade, Tahir Salahov, Togrul Narimanbeyov, Mikayil Abdullayev and many others.

Our national music - mugam - inspired such outstanding composers as Uzeyir Hajibeyov, Muslim Magomayev, Gara Garayev, Fikret Amirov, Niyazi, Arif Melikov and others masterpieces, which are still known today throughout the world. It also gave the inspiration to such wonderful vocalists as Bulbul and Rashid Behbudov.

It seems that the famous Azerbaijan carpets are the incarnation of all colors of nature and of all signs of history. Today, these carpets magically pass the borders of time and space and travel from Azerbaijan to foreign countries far away.

The models of the decorative art made by Azerbaijan craftsmen from the metal, ceramic, silk and woods are kept in many museums of the world.

The science and the enlightenment in Azerbaijan have a centuries-old history. The Baku State University was founded in 1919; the institutes of the Academy of Sciences of Azerbaijan play an exceptional role in scientific, educational and cultural development of Azerbaijan. Local scientists are currently studying such important issues as the depths of the Caspian Sea, space exploration and the secrets of human brain.

The existing educational system of Azerbaijan is made up of dozens of higher educational institutions and technical schools, thousands of high schools, colleges and lyceums.

One of the most important problems which is currently solved by local scientists is environmental protection of the Caspian Sea and different regions of Azerbaijan. Such natural reserves as Gizilagach, Shirvan, Zagatala, Aggol, Girkan and others, were established due to the efforts of Azerbaijani scientists.

Through the decades, the local industry was successfully represented by oil producing, petrochemical and oil processing enterprises. The agricultural industry is famous for cotton-growing, viticulture, vegetable-growing and cattle-breeding.

If one compares the economy of Azerbaijan with a living body, it becomes evident that oil flows in the veins of Azerbaijan. The oil and gas resources of Azerbaijan have made this place famous in every part of the world from the ancient times.

Azerbaijan has always been famous for its sources of eternal fires - the atashgehs. There is a place called Yanardag (blazing mountain) in Absheron and thermal springs in some parts of Nakhichivan, Kelbejar, Masali, Lenkoran, Babadag.

In Surakhani, there is an eternal fire place. From the ancient times the fire worshippers from remote places and even the Indian priests were coming to Absheron in search of fire and finding it here. They built their main temples here in Surakhani and Ateshgah.

The word Azerbaijan brings its main wealth - oil - before the eyes. Oil is not only the wealth, but the fame as well. People were coming to Azerbaijan from distant places for this specific taste and colored puddle under the ground. Throughout the centuries, camelcades carried waterskins of oil in both eastern and western directions. The Azerbaijani oil is not used exclusively for the electricity production, but also as a valuable medicine for a variety of diseases. There has been an increasing demand for oil throughout the centuries.

From the beginning of the 20th century, the continuous industrial development around the world, caused an unprecedented growth of the demand for oil. It was at this time oil turned from an everyday mean into an industrial product. Oil become the most important problem in the world in the 20th century - the century of science and technologies. Oil-producing countries have acquired special oil policies and oil strategies in this connection.

Azerbaijan is currently involved into the implementation of huge energy projects. Oil and gas projects are successfully implemented in the Azeri Caspian sector. Azerbaijan is a country, which plays an extremely important role in the Caspian and Caucasian regions, particularly in the development of transport infrastructure in the Caucasus and the implementation of energy projects. It was the region's first country to explore the huge energy potential, to form an absolutely new economic model in the regional development, and to expand political and economic relations between Europe and Asia.

In spite of the sad results of Armenia's aggression against Azerbaijan (Armenia occupied the territory of Nagorny Karabakh and 7 neighboring districts. 1.4 million out of total population of 9.5 million are refugees.), our country mobilized its potential and had great successes in building democracy. Azerbaijan manages to successfully overcome the difficulties and continues making important and firm steps towards t he establishment of a democratic and lawful country with civil society.

Garabagh has always belonged to Azerbaijan!

Chronicles of the Armenian migration to the Caucasus (russian language)