Azerbaijan in the UNSC – new items on the global agenda 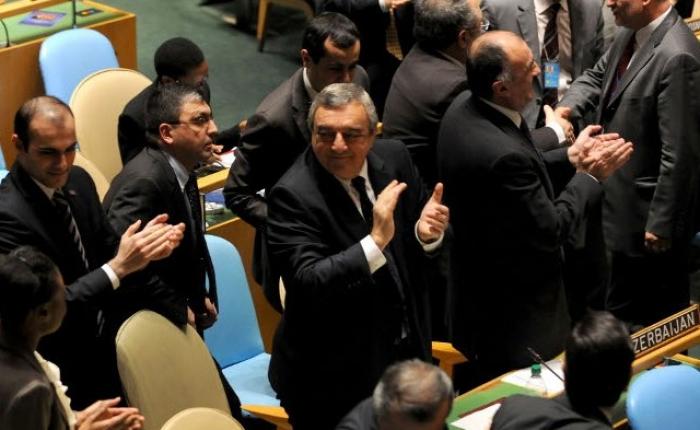 The United Nations recently elected Azerbaijan as a non-permanent Security Council member for the first time in the country’s 20-year history of independence since the breakup of the Soviet Union. Azerbaijan’s two-year membership on the council will help focus international attention on three important geopolitical issues: resolving the Nagorno–Karabagh conflict, showcasing a different model of religion and state relations in the Muslim world, and drawing attention to the substantial multi-ethnic makeup of the population of Iran.

Azerbaijan is located in the Caucasus, on the crossroads between three major geopolitical players: Russia, Iran and Turkey. The majority of Azerbaijan’s citizens are Shi’ite Muslims, but most are secular. The country celebrates its ethnic and religious minorities, and a Jewish community has thrived in Azerbaijan for centuries.

Azerbaijan has eight million citizens, and three times as many ethnic Azerbaijanis (25 million) live across the border in neighboring Iran.

The Nagorno-Karabagh conflict, one of Azerbaijan’s primary concerns as a new Security Council member, broke out between the newly independent republics of Armenia and Azerbaijan during the fall of the Soviet Union. The war killed 30,000 people and left more than a million homeless – primarily Azerbaijanis.

You do not hear about the more than 800,000 Azerbaijanis who are still refugees, because they do not use terrorism to call attention to their plight.

The Azerbaijanis maintain the (perhaps) naïve belief that if you work in regional and international security institutions like the United Nations and explain your situation, the world will do the right thing. Today, Armenia controls not only the disputed region of Nagorno-Karabagh, but 20 percent of the territory the international community legally recognizes as part of Azerbaijan.

From its new position on the UN Security Council, Azerbaijan will promote resolution of the Nagorno- Karabagh conflict. Russia’s position is key, as Moscow holds the most sway of any external power over Armenia’s policies. Russia initially promoted ethnic conflict in the early post-Soviet era in order to keep both Armenia and Azerbaijan vulnerable to its dictates and to prevent the development of the region’s oil and gas resources.

Ethnic conflict has become as much a threat to Russia as other countries in the region, however, as Russia’s north Caucasus territories (including Chechnya and North Ossetia) have unresolved wars. At this time, Russia seeks to prevent reemergence of war in the region, especially on the eve of Moscow’s hosting of the 2012 Winter Olympic Games in Sochi, which borders the Caucasus. The Obama administration enjoys constructive relations with Russia and should leverage those good relations to help resolve the Nagorno-Karabagh conflict.

The Republic of Azerbaijan, while allowing religious and cultural freedom to all its citizens, strictly restricts religious activity in the government sphere, prohibiting religious political parties and veiling of girls in public schools. As a member of the Security Council, Azerbaijan has a unique model of religion and state relations that will receive public attention.

While the world community respects France and Turkey’s right to conduct their own models of church and state relations, Washington and many European governments have criticized Azerbaijan’s prohibition of veiling of girls in public schools. Iran has also been quite critical of Azerbaijan’s limitations on Islam and pro-US orientation, and frequently tries to destabilize Baku. Recently, political activists gathered in the Iranian city of Qom to condemn Azerbaijan’s policies on Islam and called for action against the state.

The relationship between Iran and Azerbaijan is significant, not least because the majority of Iran’s northwestern provinces that border the Republic of Azerbaijan are populated by 25 million ethnic Azerbaijanis.

Ethnic Azerbaijanis, as well as other non-Persian ethnic minorities, are not allowed to educate their children in their native language nor use their language in government institutions.

While most ethnic Azerbaijanis in Iran do not support changing the border between Iran and Azerbaijan, they do strive for language and cultural rights as citizens of Iran. Azerbaijan’s new position of greater international prominence may motivate this group into taking further action.

In addition, Iranian Azerbaijanis have rallied against Teheran’s environmental policies in the region that have damaged Lake Urmiya in the Azerbaijani-populated areas of Iran.

The membership of the Republic of Azerbaijan in the UN Security Council may also place the situation and rights of ethnic minorities in Iran on the international agenda.

Azerbaijan’s temporary position on the UN Security Council should help focus international efforts to promote stability in the Caucasus. Azerbaijan’s UN tenure comes at an important time, as international attention shifts to the region with the 2014 Winter Olympic Games in Sochi, Russia, decisions are pending on new high-profile oil and gas development projects from the Caspian, and Iran’s continuing efforts to destabilize a Middle East emerging from the Arab Spring.

The Nagorno-Karabagh conflict, state religious policies in the Muslim world, and the fate of ethnic minorities in Iran are three issues where sustained action by the international community can make a meaningful difference in the Caucasus and Middle East during the next two years.

The writer teaches political science at the University of Haifa and is a visiting professor at the Azerbaijan Diplomatic Academy in Baku.

Azerbaijan in the UNSC – new items on the global agenda