31 March - Day of Genocide of Azerbaijanis 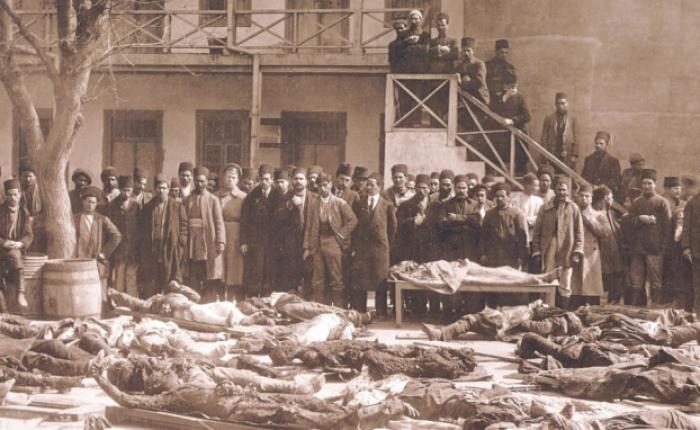 March 31, commemorated in the Republic of Azerbaijan as the Day of Genocide of Azerbaijanis, reflects the memory of the bloody massacre committed against Azerbaijanis in March 1918.

The rapid development of the oil industry in Baku in the late 19th and early 20th centuries attracted a wave of Armenian migration to the city. As one of the main industrial centres in tsarist Russia, Baku saw the emergence of an industrial proletariat and revolutionary fervour. Armenian workers, whose number increased considerably in the early 20th century, took active part in Baku’s revolutionary and socialist movements. On the eve of the first Russian revolution (1905-1907), the Armenian nationalist Dashnaksutyun Party started to spread nationalistic ideas among Armenian workers in Baku. They used revolutionary ideas to promote their own

nationalistic agenda. Inspired by ideas of creating a “Greater Armenia,” Armenians carried out a series of bloody massacres against Azerbaijanis in the period of 1905-07. Hundreds of Azerbaijani settlements were destroyed and razed to the ground, and thousands of civilians were brutally killed.

The massacre of 1918 was a more skilfully prepared and ruthlessly implemented act than the 1905-1907 attacks. The victory of Bolsheviks during the Russian revolution of 1917 and thereby collaboration with them gave the Dashnaksutyun Party way for smooth realisation of its nationalistic objectives. Capitalizing on the situation that followed October 1917 Revolution in Russia, Armenian nationalists began to pursue the implementation of their plans under the banner of Bolshevism. In 1918, leader of the Russian Bolsheviks Vladimir Lenin appointed

ethnic Armenian Stephan Shaumyan Extraordinary Commissar of the Caucasus. By that time, the Bolsheviks seized power in Baku and viewed the Armenian Party of Dashnaktsutyun as a source of support for eliminating the influence of Azerbaijani national party-Musavat in Baku and the regions. In this regard, the interests of Bolsheviks and Dashnaks by March 1918 coincided.

On March 2, 1918, speaking at a meeting of the Baku Soviet, Shaumyan strongly criticised the Musavat Party, blaming it for secession of Azerbaijan from Russia. Right at the beginning of tragic events, the Baku Soviet, under the pretext of combating counter-revolutionary elements, set about the plan to liquidate Azerbaijanis throughout the Baku Province. By the acknowledgements of Stephan Shaumyan, 6000 armed soldiers of the Baku Soviet and 4000 armed men from Dashnaksutyun Party took part in the massacre of Azerbaijani civilians. 3 On 30 March Armenian-Bolshevik units subjected Baku to volley fire from ships. Then, armed

Dashnaks attacked the homes of Azerbaijanis and carried out a merciless slaughter. On 31 March and in the first days of April, the carnage became even more ruthless. Thousands of Azerbaijani civilians were killed only because of their ethnicity. In this period, Armenian-Bolshevik units wiped out more than 20,000 Azerbaijani civilians in Baku: people were burned in their homes, killed and tortured with unparalleled cruelty. As a result, more than 16,000 people were killed with utmost barbarity in the Guba province in the first five months of 1918; a total of 167 villages were destroyed, 35 of which do not exist to this day.

The Armenians had installed machine guns in various places of the city in order to shoot those who were trying to escape. Avanes Apresyan, an Armenian officer, one of the active participants in the massacre of the Azerbaijanis, wrote in his memoirs titled “Men were like this,” that in Baku alone, they murdered 25,000 Azerbaijanis in the March massacre. However, genocide of the Azerbaijanis by the Dashnaks was not limited to Baku. Within a short period of time, Armenians committed massacres in Shamakhy, Guba, Irevan, Zengezur, Karabakh, Nakhchivan and Kars. The discovery of mass graves in Guba region of Azerbaijan in 2007 confirms

Armenian inhumanity. Study of the burial site has revealed that during an Armenian armed attack on Guba in 1918, people were subjected to unprecedented violence and killed with cruelty. The grave contains remains of mass burials of local residents. Along with the Turkic-Muslim population, Armenian forces also slaughtered local Jews and Lezgins. Even those who demanded an end to the massacre, including Russians or Georgians, were brutally victimized in different places of the country.

S. Shaumyan boasted about Armenian brutality against Azerbaijanis: "We have gained brilliant results in the battles. The enemy has been utterly annihilated. We forced conditions on them and they signed them". Shaumyan shamelessly justified the involvement of the armed forces of the Dashnaksutyun Party in the slaughter of Azerbaijanis in Baku. In the letter of 13 April 1918, addressed to Council of People’s Commissars of Russian Soviet Federative Socialist Republic, Shaumyan justifies the heinous crimes as saying, "the presence of national divisions has partly characterised the civil war as a national massacre, but it was impossible to do otherwise. We did it on purpose. Poor Muslim people have suffered a great deal, but have now come together

with the Bolsheviks and Soviets… oil is already at our disposal”. The German researcher Erikh Figle in his research “Truth terror. Armenian terrorism – roots and reasons” speaking of Shaumyan’s activity in 1918 stresses that his aim was to armenianize Baku “by any hooks or crooks”.

According to various estimates, 12,000 to 30,000 people were killed in Baku in three days alone. In this regard, S.Shaumyan, the Chairman of Baku Soviet, did not hide his satisfaction: "We were frightened by the national structure of our city. We were afraid that the fight might assume an unwanted colouration. We even had to resort to the Armenian Dashnak Regiment. We could not even allow ourselves the luxury of refusing their services. The Armenian National Council carried out arrests, searches, requisitions, etc. on its own. However, the victory is so great that it does little to overshadow the reality". Baku Soviet’s reliance on the Dashnak forces caused outrage among the Bolsheviks of other nationalities. One of the witnesses of the genocide of

Azerbaijanis, Bolshevik Blyumin, later noted in his memoirs, "With the advent of the events of 1918, we resorted to Dashnak troops, as we had no armed forces of our own. Still, Dashnak troops did their dirty work. They turned a civil war into a national cleansing, having slaughtered up to 20,000 poor Azerbaijanis".

The March events of 1918 became the focus of attention following the proclamation of Azerbaijan Democratic Republic (ADR). The Extraordinary Investigation Commission (EIC) was established by ADR on July 15, 1918 in order to investigate the violence against Azerbaijani population. An important trait of this commission was that it was comprised of the best lawyers of that time representing different nationalities – Russians, Jewish, Polish, Georgians and even Armenians. These factors testify competence and impartiality of the EIC. Materials collected by the EIC by August 1919 filed in 36 volumes and 3,500 pages. Based on this evidence, the EIC

prepared 128 reports and drafts to file lawsuits against 194 persons accused of different crimes against a peaceful population. Thus, by mid-August, 24 people in Baku and about 100 people in Shamakhy were arrested. This was the first attempt to conduct a political and legal assessment of the policy of genocide perpetrated against the Azerbaijanis. However, the demise of the Azerbaijan Democratic Republic made it impossible to complete this work.

After restoring its independence in 1991, the Republic of Azerbaijan resumed political assessment of genocide of March 1918 and is committed to complete ADR’s unfinished attempts to bring about justice. On the eve of the 80th anniversary of the tragedy, the then President Heydar Aliyev issued a Decree to announce 31 March as a national day of mourning. The Decree has become a key document for conducting a political and legal assessment of the genocidal acts committed against Azerbaijanis in the beginning of 20th century. The Decree also signifies the Azerbaijani people’s devotion towards its national values, historical roots and homeland. At

the same time, the commemoration of the Day of Genocide of Azerbaijanis raises the awareness of the world community to the facts of the massacre and ethnic cleansing of Azerbaijanis in the past and present.

Massacres of Turks and other Nationalities. The Massacres in Baku

Acts of Mass Slaughter Committed by the Bolsheviks and Dashnaks

31 March - Day of Genocide of Azerbaijanis