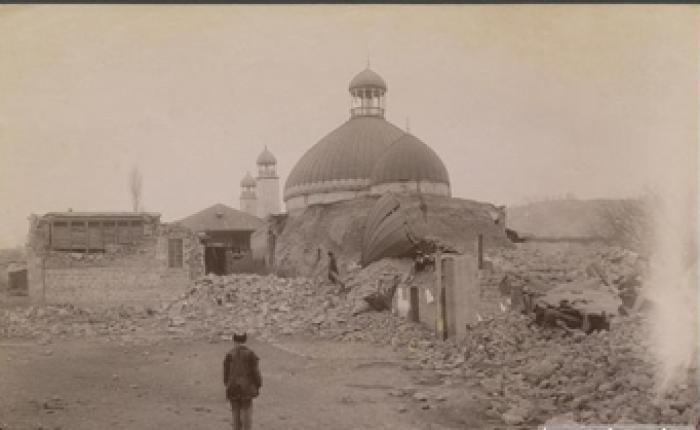 The old Azerbaijan town of Shamakhi also underwent terrible lootings and other atrocities. The Armenian savageries in the town of Shamakhi and the homonymic uyezd are described on 925 sheets of investigational materials arranged in seven volumes.

A. Khasmammedov, the chairman of the Extraordinary Investigation Committee, wrote in a report to the Minister of Justice that the town consisted of two parts—upper, or the Armenian part, and lower, or the Muslim part. The uptown was predominantly populated by Armenians, Molokans (Russian sectarians), and   partially by Muslims while the lower quarters were exclusively populated by Muslims. The Muslim population dominated in the Shamakhi uyezd. Armenians and Molokans lived only in six villages. In the past, Muslims lived in concord with Armenians and Molokans, had never afflicted them, and always tried to keep friendly neighboring relations. During the widespread hostilities between Armenians and Muslims in many cities and villages of the South Caucasus in 1905, Shamakhi was one of the rare places where no such incidents occurred.

On March 18, 1918 (Julian calendar), the Armenians mobbed into the Muslim quarter shouting “We have waited for this day for 12 years. This is not 1905, when [czar] Nikolai helped you. Now there is no one to help you. Call your Saint Hezret Abbas to save yourselves.”158 When a Russian doctor, Sazanov, who lived in Shamakhi, accused the Armenians of ruthless crimes against the Muslims on the night of March 19, 1918, the Armenians replied, “We have no compassion for the Muslims, all of them must be annihilated.”

Armenian soldiers from other uyezds of the South Caucasus began to accumulate in Medrese village located five miles away from the town. In early March, word leaked out that Armenian detachments of approximately three thousand soldiers armed with rifles and machine guns arrived in Shamakhi from Baku. A delegation from Shamakhi, which included both Muslims and Armenians, was sent to meet the units. The meeting took place in a Molokan village of Gozlu-Chay (Khilimli). The units were asked to give up their arms to the Shamakhi garrison. However, the Armenian commanders refused to yield and declared that their intention was to clean the uyezd from robbers, put an end to anarchy, and reinstate normal conditions. They also promised to bypass the town of Shamakhi and head for the Medrese village.

On March 15, when the troops were passing by the town, they opened fire at the Muslims. Soon skirmishes pervaded the entire town, resulting in a number of dead and injured from both sides. Toward evening, the shooting gradually ceased. That day, the local Armenian bishop gathered his priests from all Armenian villages of Shamakhi to take a collective oath to live in peace and keep the law. When villagers from Kurdemir proposed to the Armenian leaders to live in concord and awakened to the oath taken by the Armenian priests, the Armenians responded, “The Muslim clergy may heal the breach with the Armenian priests, but the Armenian people want to fight with Muslims and the British will support them in this cause.”

In the morning of March 18, 1918, the Azerbaijani population of Shamakhi woke up to the sound of shooting: the Armenians had surrounded the southern part of the town. The Muslim quarters were fired by cannons and machine guns from the south and rifles from the uptown Armenian quarters in the north. The attack was quite unexpected for the Muslims, who trusted in the vow taken by the Armenian bishop Bagrat on the cross and the Bible that the Armenians would always live in peace and friendship with the Azerbaijanis and would never take up arms against them. The Azerbaijanis, unprepared for the assault, attempted to defend themselves, but they eventually were forced to yield under the pressure of cannonade and machine gun fire. In a few hours, the Armenians intruded into the Muslim-populated Piran-Shirvan quarter on the boundary between the Azerbaijani and the Armenian parts of the town. They began to loot and burn houses and slaughter innocent people. The best-furnished houses of the town, which belonged to the wealthy and well-known Muslims, were put on fire. The mansions of the uyezd’s mufti, the Shikhaliyevs, the Hasanovs, the Jabrailovs, Huseynbeyov, Alimirzayev, Efendiyev, the Babayevs, the Maharramovs, the Veysovs, Boyuk bey Huseynov, Haji Vahab Alekberov, and others were among the destroyed property.

The Armenians shot without distinction at men, women, and children running out of burning houses. The Armenians broke into the houses, plundered, killed, and then burned the dwellers. In the evening, the Muslims sent a delegation to the Armenians to solicit a truce. The mission failed and the Armenians did not stop the violence. Fire spread through all quarters, and the next morning, the town was in ruins. There were heaps of corpses in the streets. The Armenians had murdered the Azerbaijanis with unheard and unthinkable cruelty. Remains of women who had been tortured and killed were all over. Their breasts had been cut, abdomens had been torn—they had undergone the cruelest tortures. Children had been nailed alive on the ground. The Armenian ferocities in Shamakhi continued for several days. When the Armenians heard of the approaching Azerbaijani units from Ganja, they retreated to Gozlu-Chay. However, the Armenian forces still outnumbered the Azerbaijani troops. For this reason, the Azerbaijani units were forced to leave Shamakhi after four days.

The Azerbaijani soldiers helped the majority of the Muslim population leave  the town. In a hurry, people were not able to take even the most necessary things. At the same time, many residents—especially the poor, the sick, the elderly, and the children—were unable to leave the town. On the third day after the withdrawal of the Azerbaijani troops, the Armenian gangs again invaded the town. The atrocities repeated with a yet greater cruelty; the Armenians were merciless in punishing the remaining people. All of the Azerbaijani quarters were reduced to ashes. All mosques of the town, including twelve neighborhood mosques and the eight hundred-year-old Juma mosque, which was the most significant piece of local architecture, were burned along with other sacred places. All Azerbaijani quarters of the town were razed to the ground. No house remained unharmed.

The Armenians also killed or burned alive many women and children who had taken refuge at Haji Jafargulu’s house and courtyard. The members of the Extraordinary Investigation Commission found a lot of human bones at the crime scene. In summer 1918, after pushing Armenians out of Shamakhi, Turks gathered and buried the bodies of the victims of the massacre. The report prepared in October-November 1918 showed that a number of bodies continued to remain unburied in the mosque’s yard. In addition, many bones were found in other burned mosques and houses.

The records of the commission described the ruins of several mosques and a number of houses and shops; they also included forty-five photos of mortal remains. According to another record, one of the Armenian leaders, in a conversation with his pals, boasted that during the Shamakhi massacre, he raped and then shot ten Muslim girls with his personal handgun. A scrutiny confirms that both Armenian attacks on Shamakhi were based on detailed plans elaborated by Dashnaks. The raids were led by Stepan Lalayev, Gavril Karaoglanov, Arshak Gulgangian, Mikael Arzumanov, Karapet Karamanov, Sedrak Vlasov, Samvel Doliev, the Petrosiants, the Ivanovs (father and son), barber Avanesov, Agamalov from Shusha, and others. These names were verified during interrogations of hundreds of witnesses and victims who managed to survive and testified to the Armenian leaders’ direct involvement in killings and lootings. The victims testified that the former assistant chief of the uyezd, Gavril Karaoglanov, the patron of the Shamakhi Armenian church, Mikael Arzumanov, a well-known merchant, E. Ivanyants, and barber Samvel Doliev, were the initiators and executors of these massacres. The Armenians robbed the possessions of the Azerbaijanis in the amount of over one billion manats in the town of Shamakhi alone.

A. Novatsky, the member of Extraordinary Investigation Commission, prepared a report based on numerous material evidences and witness testimonies, where he proposed to open a criminal case against those who committed crimes, murdered, and plundered the Azerbaijani civilians. The Extraordinary Investigation Commission followed the proposal and decided to open criminal cases against the chief organizers of the massacres and launch a criminal investigation. Besides the town, eighty-six surrounding Muslim villages were also subject to treacherous and surprise attacks by the Armenians.

At dawn of March 18, along with the main offensive on Shamakhi, the Armenian gangs unexpectedly attacked the village of Engekharan located three miles away form the town. The investigation material on the Armenian atrocities in the defenseless village includes a list of 237 villagers torturously killed by the Armenians; the list was compiled based on the witnesses’ testimonies. The Armenian attackers beset the village, killed and looted the population, burned the houses, and took captives. The captured children were taken to the Azerbaijani village of Melem and kept there. The Armenians took eighty-eight men to the Molokan village of Chukhuryurd.

Short of the village, they entered a garden and shot twelve captives. The rest were taken to the Armenian headquarters in the Medrese village. On the way to Medrese, they killed two more villagers. Only seventy-four Azerbaijanis reached Medrese alive. Soon after the arrival of the Azerbaijani troops from Ganja, relatives of the captives from Engekharan went to Medrese to find out about the prisoners. Near the village, they saw that all captives had been killed and their corpses had been defaced. Ears, noses, arms, and legs were torn apart. There were scorches on chests of many bodies. This fact proves that the Armenians had made fire on the victims’ chests when they had still been alive. Besides those who were murdered directly, many Engekharan villagers who managed to run from the massacre died of starvation, cold, and diseases. As per the commission’s report, the population of Engekharan halved within those few days.

A report submitted to the Extraordinary Investigation Commission on April 3, 1919, by the police chief of the Shamakhi uyezd included a list of villages ruined by the Armenians in the three police districts: nineteen villages in the Gebristan district, forty-one villages in the Medrese district, and twenty-six villages in the Kashun district (eighty-six villages in total). The final report drafted for fifty-three villages included the death toll (including men, women, and children) and the total damage inflicted on each village of the Shamakhi uyezd. The report was based on comprehensive investigations (witnesses’ testimonies, interrogation protocols of victims, official data on the number of population and the value of their properties, lists of dead and injured, etc.) carried out for each village by the Extraordinary Investigation Commission. The body count and the amount of damage in some of these villages are given below.

The investigational reports drafted for other villages reflect a similar aftermath of the massacres. All reports were signed and sealed by the members of the Extraordinary Investigation Commission. Pursuant to the investigation materials, the Armenians killed 8,027 people in fifty-three villages of Shamakhi, including 4,190 men, 2,560 women, and 1,277 children; the gross total amount of damages in these villages was 339.5 million manats in then-year values.173 The Armenian atrocities against the Azerbaijanis, their property, cattle, and croplands were an actual case of genocide.

The Massacres in Maku, Khoy, and Urmia

Crimes committed against azerbaijani people in Guba in 1918