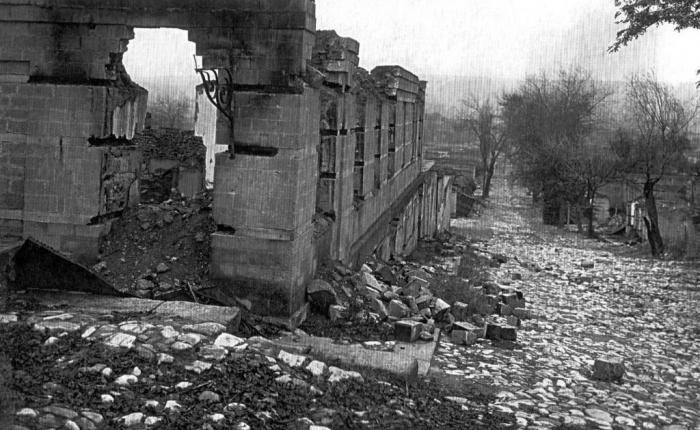 On February 13th 1919, we, the members of the Extraordinary Investigation Commission of Azerbaijan Mikhaylov and Keyussovsky, examined the Navagi settlement to identify the scale and nature of its destruction by Armenian attacks, in present of the undersigned senior representative of Navagi settlement Aziz Bagir oglu. We found that:

The Navagi settlement is situated in a steppe, approximately 3 versts from the railroad station of the same name, and has only Moslem population. The settlement comprises of 2,000 household farms, which are scattered around in groups on both sides of the railroad at the distance of ?, ? versts from each other. The buildings have brickwork and flat pise roofs. The … part of the settlement looks like destroyed by fire even from a far distance. There are no estates which survived the fire and destruction, probably except several newly built houses. All others, a total of 2,000, were burnt down and represent ruins of burnt walls at present. Several houses in the settlements with richer population, are currently under reconstruction. These host several families of villagers, who survived the pogrom. Larger buildings, such as the mosque, school with 12 rooms, village government with … house, mills, all houses with stone foundation, … buildings, were strongly burnt down. Up to 80 shops, stores, storehouses with goods and warehouses were burnt in the village.

Fruit gardens in estates were cut or burnt. Nearly 300 large houses and buildings were burnt, total of … up to 2,000 buildings. Nearly 30 devices for pressing hay and stack were burnt. One may conclude from the foregoing that Navagi village was very large and rich, but it can be considered close to fully destroyed now. This is the protocol signed by the witnesses (attached are "21 acts on murders and 2 statements of special persons (pp. 24-27). One of the acts is attached further).

I, the senior representative of Kubali Balaoglan of 217 houses, composed, together with selected honorary residents of our village, the following act: During Armenian attack upon our village in March of 1918, our residents suffered the following casualties:

Genocide over Azerbaijan Nation in March of 1918

REPORT of Mr. Novatsky, member of the Extraordinary Investigation Commission

Protocols of inquiries, acts and other materials on destruction of Moslem villages in the Shemakha uyezd (26 October - 15 December 1918)