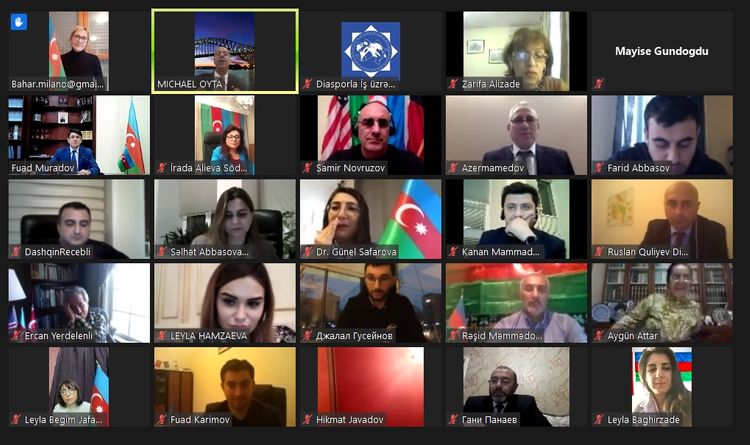 The State Committee on Work with Diaspora held a virtual meeting with the participation of Azerbaijanis around the world on the liberation of Shusha, the pearl of Karabakh, our ancient cultural center.

Representatives of Azerbaijani houses abroad, Coordination Councils, Karabakh schools, members of the diaspora firstly watched again together the historic speech of President of the Republic of Azerbaijan, Supreme Commander-in-Chief Ilham Aliyev on the liberation of Shusha.

Chairman of the State Committee on Work with Diaspora Fuad Muradov congratulated our compatriots living abroad on this unparalleled victory and noted that "This is a victory of the brave Azerbaijani Army, a historic victory of President Ilham Aliyev. I express my gratitude from each of you to the Supreme Commander-in-Chief. "

The chairman of the committee then said: "The unity of Azerbaijanis around the world has become even stronger, and we have observed this more closely with the establishment of Coordination Councils, Azerbaijani houses in recent years. Today, rallies for support to Karabakh are being held all over the world, and our compatriots are raising their voices.

Rantik Agarunov, the brother of the National Hero of Azerbaijan Albert Agarunov, congratulated the people of Azerbaijan on the great victory on behalf of his family and wished greater success to our glorious Army, which gave us this invaluable joy.

The speakers noted: “On the eve of the National Flag Day, the liberation of our ancient city from occupation, the waving of our sacred flag there is a great victory of Azerbaijan. We are living the most glorious day of our history. We are grateful to our Army and the Supreme Commander-in-Chief for creating this glorious history. Dear Supreme Commander-in-Chief, your name is written in golden letters on the most beautiful page in the history of this victory. "

At the meeting attended by 54 of our compatriots from Serbia, Poland, Hungary, Slovakia, Switzerland, Sweden, Norway, Finland, the Netherlands, England, Israel, Canada, Estonia, Latvia, Lithuania, Greece, Denmark, Czech Republic, Italy, Malta, Kingdom of Spain, USA, Germany, France, Austria, Australia, Turkey and Russia, participants spoke about the irreplaceable services of the Azerbaijani diaspora in conveying the truth about Karabakh to the international community, the importance of the rallies, and exchanged views on the important results of the organizing of diaspora.

Victims of Ganja and Barda terror were commemorated in Ankara

The Azerbaijani community in Calgary, Canada, held a solidarity rally