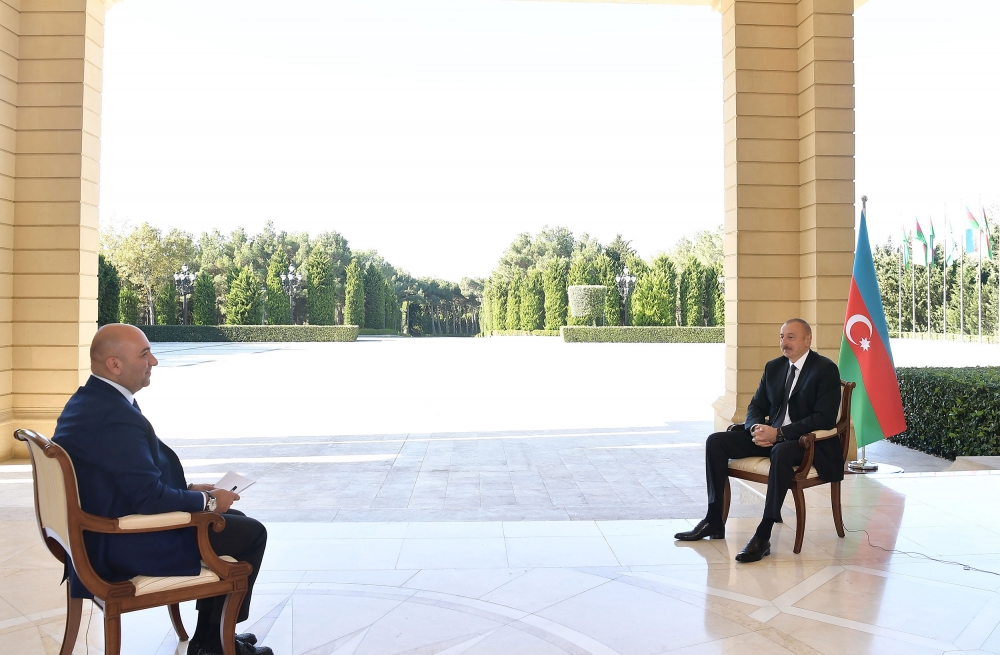 “As always, Turkey has openly and unequivocally supported us on this issue again. The statements of my dear brother Recep Tayyip Erdogan, the statements of other high-ranking officials were further manifestation of the position of brotherhood. Pakistan and its Prime Minister have made a very positive statement, showing great solidarity. Other countries have made similar statements,” President Ilham Aliyev said in an interview with Haber Turk TV channel, speaking about the reaction of international organizations and the international community to Armenia's attack on Ganja, AZERTAC reports.

“I can't say that it was widespread on a global scale. However, it is as clear as day. A statement is made about a ceasefire, but such a cowardly attack is organized less than a day later. This shows yet again who is not interested in a ceasefire,” President Ilham Aliyev said.

Noting that Azerbaijan's goal is to return its citizens to all occupied lands, the head of state said: “I said that the ceasefire would allow things to move from a military onto political and diplomatic levels. At the diplomatic level, this issue should be resolved around the negotiating table, Armenia should withdraw from the other occupied territories, Azerbaijani citizens should return there and peace should be established. But it seems that Armenia's plans were completely different. They believed that by using this ceasefire, they could reduce their military losses, gain time, mobilize new forces and thus continue their attacks on Azerbaijan. They were wrong. I said that if Armenia did not act positively, they would regret it, and I was right.”

“Our position is based on historical justice, international law and best international experience. In other words, at the first stage the Armenian armed forces must withdraw from the occupied territories. In principle, this issue has already been reaffirmed within the Minsk Group – five districts, then two districts, then Nagorno-Karabakh itself, Shusha, Khankandi – the Azerbaijanis lived in many villages there. Azerbaijani citizens must return there and discussions on the future of Nagorno-Karabakh in a new environment, in a new climate will be continued,” President Ilham Aliyev said in an interview with the Turkish Haber Turk TV channel in response to the host's question “What model do you envisage after the liberation of Karabakh?”, AZERTAC reports.

“We are getting close to peace. Therefore, there is no change in our position on the Armenians living there. Azerbaijan is a multiethnic state. Thousands of Armenians live in different parts of Azerbaijan, especially in Baku, and they are our citizens. There are many ethnicities living in our country and this increases the strength of our country. Therefore, the Armenians living in Nagorno-Karabakh should not be worried at all. Once we save their lives from that criminal junta, they will live better, safer, in a more secure environment and their well-being will improve,” he said.

Noting that Nagorno-Karabakh lives in abject poverty, the President of Azerbaijan said, “We will invest in it, we will implement social programs there, we will have programs to create jobs. All this will be a new stage for the Armenians living there and the Azerbaijanis who will return there.”