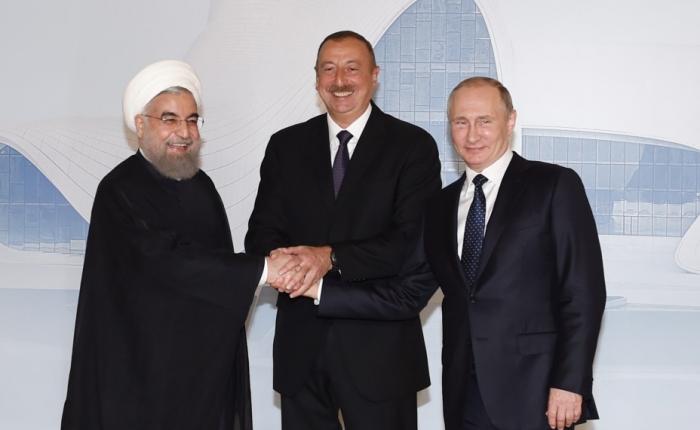 Baku, August 8. A Trilateral Summit of the heads of state of Azerbaijan, Iran and Russia has been held at the Heydar Aliyev Center in Baku.

First of all, let me warmly welcome all our guests. Welcome to Azerbaijan! Today, Baku is hosting a trilateral meeting of the presidents of Iran, Russia and Azerbaijan for the first time in history. A new format of cooperation among three countries is emerging today. I should note that in April of this year, foreign ministers of the three countries met in Baku at the initiative of Azerbaijan. I am sure that today's summit will give a new impetus to regional cooperation.

Our peoples have lived side by side for centuries and share a common history and geography. Azerbaijan has close ties of friendship with Iran and Russia. These ties have further evolved in recent years and reached the level of strategic partnership.

Azerbaijan was opposed to the international sanctions imposed on Iran and Russia, and has repeatedly and openly expressed its position. Azerbaijan pursues an independent policy. This policy is based on the norms of international law, justice and national interests of our country. Close ties with our neighbors are in line with our national interests.

Iran and Russia respect the territorial integrity, independence and sovereignty of Azerbaijan. Both countries have repeatedly expressed the need to resolve the Armenian-Azerbaijani Nagorno-Karabakh conflict within the framework of international law.

The territorial integrity of Azerbaijan has been violated for many years. Twenty per cent of our land is under occupation. This occupation affects more than a million Azerbaijanis. The UN Security Council has adopted four resolutions in connection with the conflict. They contain the requirement of an unconditional withdrawal of Armenian armed forces from the occupied lands. Unfortunately, these resolutions have not been fulfilled for more than 20 years.

Dear colleagues! The Caspian Sea connecting us is our common heritage. The Caspian Sea is a sea of peace and cooperation, and should remain as such. Protection of the Caspian Sea ecosystem is a common cause for all Caspian littoral countries. Azerbaijan is making its contribution in this direction. The Caspian Sea has rich oil and gas deposits. In turn, the State Oil Company of the Republic of Azerbaijan, SOCAR, is interested in participating in the projects carried out in Iranian and Russian sectors of the Caspian Sea.

Russia and Iran are our major trading partners. I am confident that this trilateral format would be beneficial for the businesses of our countries. Increased trade, mutual investment and expansion of mutual export opportunities are of great importance to economic cooperation. There are good prospects for cooperation in financial, banking and insurance sectors. Given the broad financial capabilities of our countries, we can participate in joint investment projects in other countries.

Over the past 20 years, $200 billion has been invested in Azerbaijan. Half of this is foreign investment. There is great potential for investments in agriculture, travel and telecommunications spheres. The Global Competitiveness Index of the Davos World Economic Forum ranks Azerbaijan in 40th place globally.

There is successful cooperation in the electricity sector. Azerbaijan has joined its energy system with the power lines of Iran and Russia. The volume of energy exchange with the two countries is increasing every year. In accordance with the existing agreement with Russia, the energy system of Azerbaijan is functioning in parallel with the Unified Energy Systems of Russia. The energy systems of the two countries are connected through power lines "Khachmaz-Derbent" and "Yalama". With Iran, there is also an energy exchange through the power lines "Parsabad", "Astara-Astara", "Araz" and "Julfa". A few days ago, the power line between Imishli and Parsabad was connected. In the near future, we will fully commission the power line between the cities of Astara and Masalli.

Azerbaijan has turned from a country importing electricity into a country exporting it. Our export capacity is growing. I am confident that together we can achieve the formation of a reliable energy corridor that will provide for energy exchange among the three countries and access to new markets.

I am glad that reliable cooperation has been established in the area of border security. At the initiative of the Azerbaijani side, the heads of border services of Iran, Russia and Azerbaijan held a meeting in Baku this year. Deepening of cooperation in this field, joint exercises (including the Caspian Sea), joint activities and rapid exchange of information will further enhance the security of our countries.

Cooperation in the transport sector has a great future. Azerbaijan is the only country in the world to have borders with Iran and Russia. At present, there is a railway link between Russia and Azerbaijan. This year we decided that Azerbaijan would extend its railway to the border with Iran in the near future. I do hope that we will achieve this in the coming months. At the same time, the foundation-laying ceremony of a railway bridge over the river Astara on the Azerbaijani-Iranian border was held recently. These infrastructure projects are an integral part of the "North-South" transport corridor.

The "North-South" transport corridor is a transnational project of strategic importance. In the future, this corridor will benefit many countries. This corridor has a very high economic viability. This route is very favorable for the transportation of transit of goods from the point of view of time. I do hope that together we will achieve the realization of this project soon.

It is gratifying that our countries have no problems in religious and ethnic matters. This is a huge asset of our countries.

Azerbaijan is one of a handful of countries represented both on the Organization of Islamic Cooperation and on the Council of Europe. Our countries successfully cooperate in these organizations.

Dear colleagues! Trilateral cooperation will serve peace, security and stability in the region. Economic cooperation, trilateral cooperation in the energy and transport sectors improves the welfare of our peoples. Today, we are setting an example of good neighborly relations. Today we prove that if there is mutual respect and good will, if our dreams are sincere, we can protect our countries from risks, consolidate stability and enhance cooperation even in this unstable region which is full of crises and conflicts.

Thank you for your attention.

After a few minutes, the Joint Declaration of the Summit will be signed. Hard work on the Declaration has been under way for two days. Meetings in a bilateral format have been held for two days. I met with President of the Islamic Republic of Iran Mr. Rouhani yesterday and with President of Russia Putin today. Also today, there was a meeting between the presidents of Russia and Iran. These meetings are of great importance.

I am also glad that Azerbaijan’s relations with Russia and Iran and Russia's ties with Iran are at a high level. The Joint Declaration to be signed today reflects the work done, our intentions, positions and our views of the future.

The region we live in is very complex. It is full of risks and threats. Unfortunately, these risks are not reducing but gradually growing. Under such circumstances, tripartite cooperation is essential for regional security.

The trilateral cooperation among Russia, Iran and Azerbaijan is a stabilizing factor in the region. I believe that together we will not only defend our countries from possible risks, but also, in a broader sense, deepen cooperation in the region.

The agenda today is very extensive. My colleagues have spoken about this in their speeches. Of course, we should further strengthen our political ties in the future. We are neighbors. We have good neighborly relations and should strengthen this unity. At the same time, additional measures will be taken to improve our export potential in the economic sphere and increase in turnover. Relevant ministers from our delegations have met to discuss this issue and reached a certain agreement. There are excellent opportunities, in particular, for cooperation in the field of transport and energy. This cooperation has been established through the efforts of the three countries, and many countries will join that. The "North-South" transport corridor we are creating will provide for the security of our countries and for our economic interests.

I noted in my opening remarks that our relations are underpinned by sincere cooperation and good intentions. We show and prove that this is possible. Sometimes neighbors experience problems and conflicts. Fortunately, the relations between us are only based on friendship, mutual understanding and mutual respect. We support each other, trust each other and rely on each other.

We demonstrate an excellent format of cooperation both to the region and the whole world. I am confident that the results of this Summit will be very successful. All the issues reflected in the Declaration will be fulfilled, and our people will live better, in safety, peace, tranquility and prosperity.

The Joint Declaration we will sign today is a very serious political document. Today's meeting is historic because it is based on history. Our peoples have been together for centuries. At the same time, it is the first such meeting in history. I am confident that this meeting will be continued and further cooperation among our countries will deepen.

And now let’s move on to the signing ceremony.

President Ilham Aliyev said: President of the Islamic Republic of Iran Mr. Rouhani proposes to hold the next trilateral meeting in Iran. We are grateful for the proposal and will meet again in the brotherly country with pleasure. Thank you, Mr. President.

Thus, today's summit is over. Let me thank you again and wish you all success. Thank you.