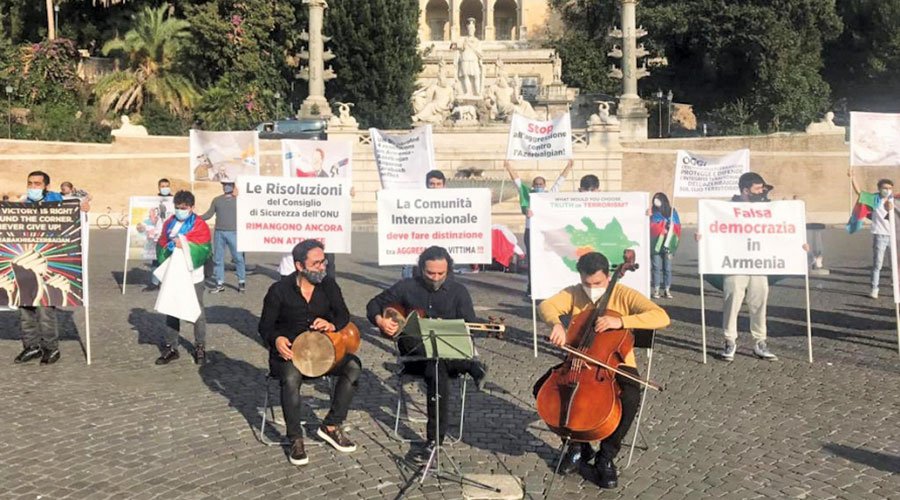 An event was held in Rome and Pisa, Italy on the occasion of "November 9 - National Flag Day" at the initiative of the Italia-Azerbaijan Union.

It was noted at the events organized with the participation of Azerbaijani youth studying in Italy that the re-waving of the tricolor flag in the occupied territories of Azerbaijan, a symbol of the sovereignty of the Azerbaijani state, gave joy and happiness to Azerbaijanis around the world. Young people singing the song "Ay Lachin" accompanied by Italian musicians at “The Fontana della Dea Roma” square in Rome attracted the attention of the city's residents.

Participants of the event tried to bring the Karabakh truth to the attention of Italian society through information boards and posters on the military provocations of the occupying Armenian army, acts of vandalism against the civilian population of Azerbaijan, the killing of innocent people and infants far from the conflict zone, destruction of civilian objects.

The event commemorated the victims of Armenian terror in Ganja and Barda, as well as in other settlements.

Representatives of the Azerbaijani diaspora in Jordan, in accordance with the existing rules due to COVID-19, held an event on the occasion of the State Flag Day of the Republic of Azerbaijan and the liberation of Shusha.

Everyone proudly waved our tricolor flag, celebrated the historic victories of our glorious army under the leadership of President of the Republic of Azerbaijan, Supreme Commander-in-Chief Ilham Aliyev, and expressed support for Azerbaijan in its just struggle.

Then the participants gathered in front of the “Le Royal” Hotel, illuminated with the colors of the Azerbaijani flag.

It should be noted that, on the occasion of the State Flag Day of the Republic of Azerbaijan, the building of the “Le Royal” Hotel was illuminated in the colors of the flag.

Dutch students learn the Second Karabakh War and its consequences

The Azerbaijani community in Calgary, Canada, held a solidarity rally

Victims of Ganja and Barda terror were commemorated in Ankara