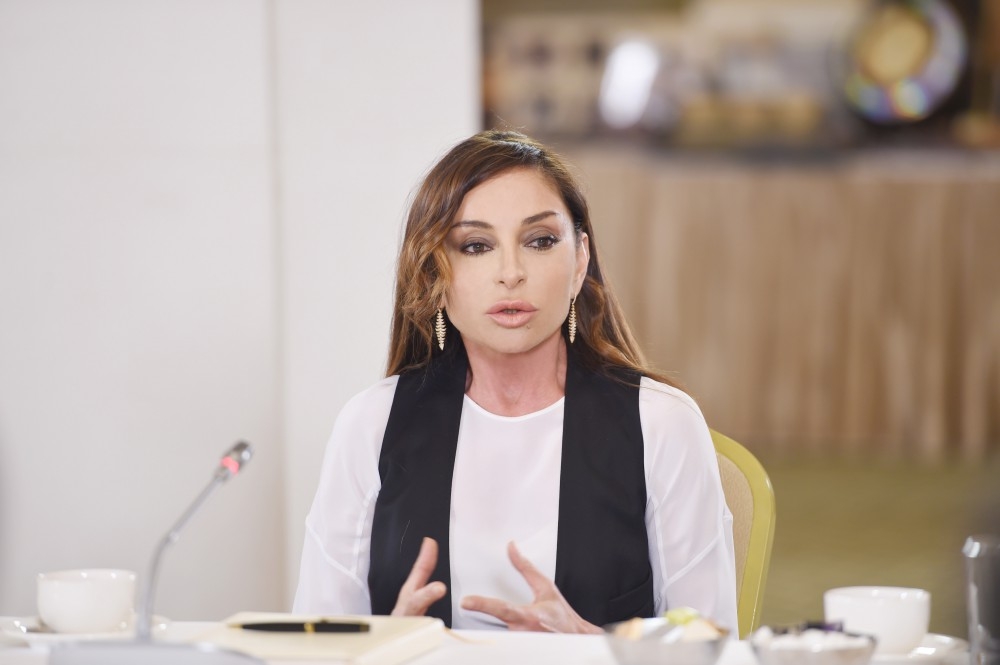 After a long break, almost 30 years later, we all are proud to see how an Azerbaijani soldier is hoisting our flag in our native lands. This is not just military success...

First Vice-President of the Republic of Azerbaijan Mehriban Aliyeva has been interviewed by Trend News Agency.

- First of all, on our behalf and on behalf of our readers, we would like to congratulate you on the liberation of a number of Azerbaijani cities and settlements from occupation.

- I congratulate all our people on the occasion of these significant events. It is possible to say that good news is coming from the front every day. Our soldiers and officers carry out combat missions with honor. While carrying out successful operations, they, one after another, liberate cities and other settlements from occupation, take strategic heights. After a long break, almost 30 years later, we all are proud to see how an Azerbaijani soldier is hoisting our flag in our native lands. This is not just military success. This is the restoration of historical justice because these are our ancestral, historical lands.

It is possible to say that today the Azerbaijani people, headed by President Ilham Aliyev, are writing a new history. This is the history of our common victories!

I see how the people rallied around their president, determination and courage of our young people when they accepted the president’s appeal to unite for a common goal, for the sake of liberation of Azerbaijani lands from the occupation.

- Each word voiced by you is consonant with the will of our people and entails unprecedented activity in actions and deeds. The efforts of our compatriots aimed at exposing the Armenian lies and slander immediately after your appeal vividly testify to this.

- I would like to thank everyone who responded to my appeal to be active in the information field. We must always remember that confrontation covers not only the line of direct hostilities, but also the information field. I see how our youth, our fellow citizens expose the fakes of the Armenian propaganda, bring the truth about the Armenian aggression to the international community on all available platforms. Their voice of truth helps to identify historical falsification and prevent the spread of absolutely baseless, deliberately false, provocative materials.

I thank the media representatives. It is possible to convey to the world today's Azerbaijani realities thanks to their objectivity and high professionalism.

It is impossible not to mention our compatriots living abroad, who, holding flags in their hands, protest against the invaders and show Armenia’s aggressive nature to the international community. I express gratitude to our friends around the world who empathize and express their principled and fair position in support of the Azerbaijani people.

- As you have repeatedly stressed in your statements, our people demonstrate incredible strength of spirit and courage even despite the Armenian armed forces resort to monstrous provocations against the civilian population.

- Unfortunately, the Armenian side deliberately violates not only the requirements of international conventions, but also oversteps the norms of morality. The attack on the civilians of Ganja, Mingachevir, Tartar, Barda, Aghdam, Aghjabadi, Goranboy, Naftalan and other settlements openly exposes Armenia’s insidious policy against Azerbaijan. How could a cemetery be shelled during a funeral procession? How could Ganja city be subjected to missile strike at night? Innocent civilians, children, women were killed. This is a crime against humanity, this is terrorism. All this clearly shows that Yerevan is not interested in peace, but only wants to escalate the conflict, transform it into a regional confrontation.

However, no foul actions of Armenia, no dirty provocations on a political platform, no insidious adventures in the information field, no monstrous attacks on civilians - nothing can break the will of the Azerbaijani people. The demonstration of unity, solidarity, compassion and mutual support is a kind of message of the Azerbaijani people that no one will ever break our spirit and desire to liberate our Motherland from occupation.

I call on the world community not to remain indifferent to what is happening and to firmly condemn the barbaric cruelty towards the Azerbaijani civilians. Yerevan must stop ignoring international conventions, as well as UN Security Council’s resolutions calling on the Armenian occupying forces to end their aggression against Azerbaijan.

Azerbaijan has never laid claim to other country’s lands. We do not attack civilians. Our cause is right. Our army liberates the Azerbaijani lands from occupation. Showing heroism and courage, our soldiers fight with honor for the Motherland and write their names in the Azerbaijani history. I wish speedy recovery to all the wounded. I express my deep condolences to the families and relatives of the killed servicemen. May the Almighty rest the souls of our brave sons, who became martyrs in the name of the Motherland. Their death will not remain and will not go unpunished. A worthy response is being given to the Armenian Armed Forces.

On my instructions, the Heydar Aliyev Foundation renders the necessary support to the families of the victims. Everything possible is also being done for the wounded soldiers to recover and return to normal life. Today, all our wounded soldiers and officers want to recover as soon as possible and go back to the zones of hostilities to continue their just struggle for the Motherland. This is the strength of spirit and patriotism of the Azerbaijani people.

- You have stressed the extraordinary unity of people these days. We all remember the phrase "We are strong together", which has become a kind of slogan in the fight against the coronavirus pandemic. Can we say that it has acquired a special meaning?

- Of course. Only by maintaining unity and supporting the president we will be able to overcome all the challenges and difficulties that will be remembered for this year.

You mentioned the coronavirus pandemic and I would like to touch on this issue in details. Thanks to the timely and thoughtful measures, we have so far managed to avoid a catastrophic scenario that, unfortunately, many countries have faced. According to the experts, our country is among those that survived the first and very dangerous stage of the epidemic with the least losses. We managed to create a professional team coordinating all aspects of the fight against the epidemic, consolidate the necessary technical and human resources. Quarantine measures that helped to reduce the rate of spread of the coronavirus were applied. Together we were able to save our homeland from the destructive spread of the disease.

Unfortunately, the virus, which has brought so much misery and suffering to many countries and peoples, has not been defeated yet. It still poses a big threat - deteriorating statistics around the world testifies to this. The war against the pandemic is still being waged. Numerous restrictions are re-entering into force in many European countries.

Our country, unfortunately, is no exception. There has been an increase in the number of infected people, some restrictions have been reintroduced in educational institutions, public transport recently.

I urge each of you not to forget about the danger of coronavirus, to follow the elementary rules that have been adhered to for so many months - to wear masks, keep distance, not to visit crowded places without urgent need. All of these well-known rules will help reduce the risk of infection, and therefore protect us and our loved ones. We always treat the older generation with special care and respect. And during the first stage of the pandemic, we thoroughly protected them. I am sure that we will be even more attentive in the current situation.

Today, when our army continues its historic mission, it is necessary to reduce the burden on the state, as well as on the healthcare system, as much as possible. It is important now that all resources are concentrated on liberation of our lands from occupation. Taking care of our health, being vigilant and disciplined, we at the same time help and protect our soldiers on the front line.

I am sure that we will cope with this task and once again prove that our strength is in unity.