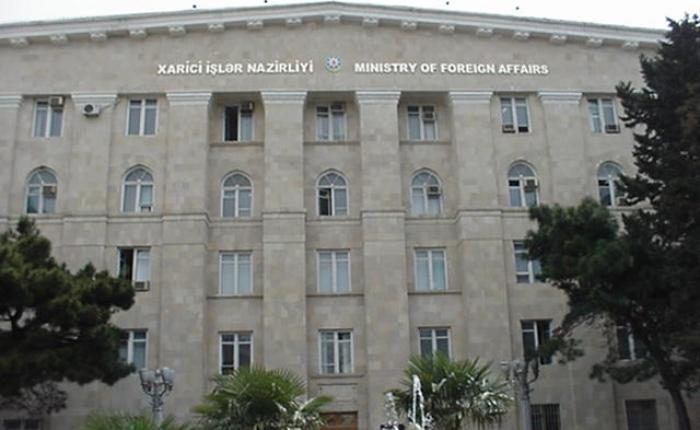 "After the October Revolution in Russia in 1917, the Bolsheviks seized power in Baku and viewed the Armenian nationalist party of Dashnaksutyun as an ally to capitalize the situation on the ground," the statement reads. "Leader of the Russian Bolsheviks Vladimir Lenin appointed ethnic Armenian Stephan Shaumyan as Extraordinary Commissar of the Caucasus."

The statement notes that at the beginning of tragic March events, the Baku Soviet and Dashnaksutyun Party, under the pretext of combating counter-revolutionary elements, set about a plan to liquidate Azerbaijanis throughout the Baku Province.

"By the acknowledgements of Stephan Shaumyan, 6,000 armed soldiers of the Baku Soviet and 4,000 armed men from Dashnaksutyun Party took part in the massacre of Azerbaijani civilians. On March 30, Armenian-Bolshevik units subjected Baku to volley fire from ships. Then, armed Dashnaks attacked the homes of Azerbaijanis and carried out their merciless slaughter only because of their ethnicity. In this period, Armenian-Bolshevik units wiped out more than 20,000 Azerbaijani civilians in Baku," according to the statement.

"Genocide of the Azerbaijanis by the Dashnaks was not limited to Baku. Within a short period of time, Armenians committed massacres in Shamakhi, Guba, Irevan, Zangezur, Karabakh, Nakhchivan and Kars. As a result, more than 16,000 people were killed with utmost barbarity in the Guba province in the first five months of 1918; a total of 167 villages were destroyed, 35 of which do not exist to this day. Armenian forces also slaughtered local Jews in Guba," the statement reads.

The statement said the massacre of March 1918 was well prepared and ruthlessly implemented against Azerbaijanis based on deliberate policy of racial discrimination and ethnic cleansing.

"The March events of 1918 became the focus of attention following the proclamation of Azerbaijan Democratic Republic (ADR). The Extraordinary Investigation Commission (EIC) was established by the ADR on July 15, 1918 in order to investigate the violence against Azerbaijani population. An important trait of this commission was that it was comprised of the best lawyers of that time representing different nationalities – Russians, Jewish, Polish, Georgians and even Armenians. Based on this evidence, the EIC prepared 128 reports and drafts to file lawsuits against 194 persons accused of different crimes against a peaceful population. Thus, by mid-August, 24 people in Baku and about 100 people in Shamakhi were arrested. This was the first attempt to conduct a political and legal assessment of the policy of genocide perpetrated against the Azerbaijanis. However, the demise of the Azerbaijan Democratic Republic made it impossible to complete this work," the statement reads.

The statement notes that after restoring its independence in 1991, Azerbaijan resumed political assessment of genocide of March 1918 and is committed to complete ADR’s unfinished attempts to bring about justice. On the eve of the 80th anniversary of the tragedy, the then President Heydar Aliyev issued a Decree to announce March 31 as a national day of mourning. The Decree has become a key document for conducting a political and legal assessment of the genocidal acts committed against Azerbaijanis in the beginning of the 20th century.

The commemoration of the Day of Genocide of Azerbaijanis raises the awareness of the world community to the facts of massacre and ethnic cleansing of Azerbaijanis in the past and present, according to the statement.

"Since late 1980s, unleashing a war against Azerbaijan and occupying its territories, Armenia continued the policy reminiscent of March Massacre by carrying out ethnic cleansing of more than one million Azerbaijanis in Armenia and in the seized lands of Azerbaijan, committing numerous war crimes, crimes against humanity, and acts of genocide, including Khojaly Genocide of February 1992."

"While commemorating the 100th anniversary of March Massacre and remembering the innocent victims, we strongly condemn the deliberate and continued policy of genocide, crimes against humanity, racial discrimination and ethnic cleansing by Armenia against the people of Azerbaijan, and reiterate the importance of ceasing impunity of Armenia to prevent occurrence of such inhumane crimes," the statement reads.