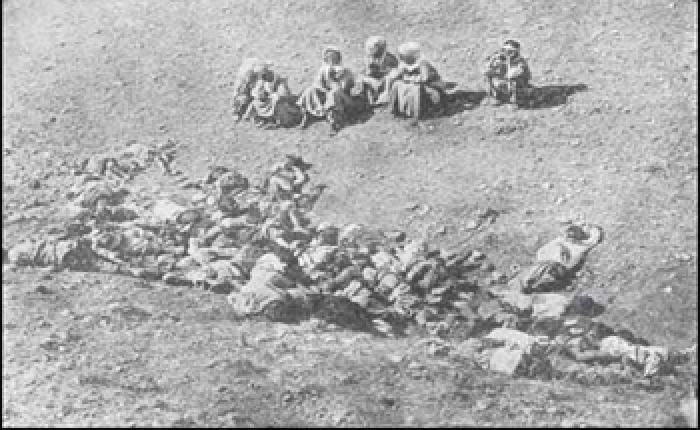 More than two-thirds of the Muslim population of Yerevan province, had either been killed or forced to flee...

During the world war, Russian military power kept any recurrence of the 1905 troubles between Armenians and Azeri Turks from breaking out. However, strife arose once again during the Russian Revolution when Russian power disappeared. The population of the largest city of Azerbaijan, Baku, was made up primarily of Turks, Armenians, and Russians. Because of the highly developed oil industry in Western Transcaucasia, Baku was an industrialized city and had a large class of industrial workers. The effects of the Russian Revolution thus were seen in Baku more than in the rest of the Transcaucasian region. The city was ruled by a revolutionary government (the so-called Baku Commune) in which most power was held by the Dashnak Party and the Bolsheviks.

The Armenians and Bolsheviks felt that the Turks, represented by a Muslim political party, were loyal to their co-religionists in the Ottoman Empire rather than to the revolution. Street fighting broke out between the Armenians and Turks, fed by hatred between the two. Because the Bolsheviks aided the Armenians, the Turks were easily routed and a massacre of Turks began (March 30 to April 1, 1918). Between 8,000 and 12,000 Muslims were killed in the city alone and half the city’s Turks were forced to flee. As the Ottoman Army advanced into the Western Caucasus, the Armenian Revolutionary forces in Baku fled and the Turks took their revenge. Almost 9,000 Armenians were killed on the night of September 14-15. The Ottomans entered the city on September 16 and restored order.

In the rest of Azerbaijan the Azeri Turks were initially at a great disadvantage. Comparatively much more well-armed, Armenian military forces were able to attack unarmed Turkish villages. Their intent was to cause the Turks to flee so that the Armenian State would have larger, more secure borders, and they were initially successful. American intelligence sources estimated that 60,000 Turks were forced to flee and that 420 Muslim villages had been destroyed by the Armenian forces.

In Yerevan Province, the Armenian government applied by then traditional tactics in clearing the Armenian Republic of Turks. Massacres and destroyed villages were an incentive to flight for the Turks. By the end of the conflict, 180,000 Muslims, more than two-thirds of the Muslim population of Yerevan province, had either been killed or forced to flee.

By 1920, the Turks of Azerbaijan had developed their power and were able to resist, aided by the resurgent Turkish Nationalists in Northeastern Anatolia. They held the Armenians to approximately the old borders of the Yerevan Province. As in Anatolia, Kars, and Baku, Armenian civilians now were forced to flee. They crossed from Azerbaijan into the Armenian Republic, effectively taking the place of the Turks of Yerevan. Conflict between the Azeri Turks and the Armenians was, in the end, stopped by the Soviet Conquest of Transcaucasia, only to break out once again in the 1980s.

From the book of Justin McCarthy, Carolyn McCarthy. “Turkrks and armenians” – A Manual on the Armenian Question.