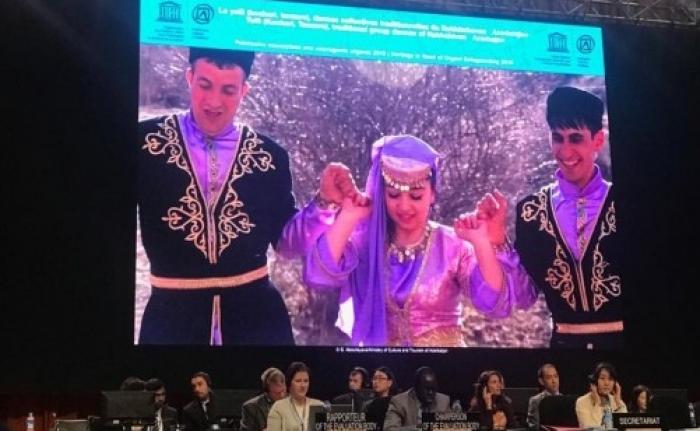 28/11/2018 - “Yalli (Kochari, Tenzere) traditional group dances of Nakhchivan has been included in UNESCO List of Intangible Cultural Heritage in Need of Urgent Safeguarding,” says a joint statement by the Ministry of Culture and Ministry of Foreign Affairs of the Republic of Azerbaijan.

The statement says that the decision was made at the 13th session of the UNESCO Intergovernmental Committee for the Safeguarding of the Intangible Cultural Heritage held in Port Louis, the Republic of Mauritius.

The nomination documents was submitted jointly by Azerbaıjan’s Ministry of Culture, Ministry of Foreign Affairs and the Permanent Representation of the Republic of Azerbaijan to UNESCO.

As is reported, the thirteenth session of the Intergovernmental Committee for the Safeguarding of the Intangible Cultural Heritage is taking place in Port Louis, Republic of Mauritius.

In the margins of session, Armenia’s provocative attempt against Azerbaijan was suppressed in the session of UNESCO Intergovernmental Committee, the Azerbaijani Ministry of Culture said in a message.

Azerbaijan’s five-year report “Chovgan - a traditional sporting team game with Karabakh horses” was adopted during the 13th session of the UNESCO Intergovernmental Committee for the Safeguarding of the Intangible Cultural Heritage.

The report includes the activity carried out in Azerbaijan in connection with the development of the traditional chovgan game, as well as the impossibility of holding this traditional game as a result of occupation of Azerbaijan’s Nagorno-Karabakh region by Armenia.

According to the report, the Azerbaijani population, forcibly expelled from the Nagorno-Karabakh region, despite the heavy consequences of the war and aggression, seeks to preserve the chovgan.

Remaining faithful to its unconstructive tradition, during the meeting, the Armenian delegation stood against Azerbaijan and demanded to return the submitted report to the Azerbaijani side.

Discussions were held in connection with this issue and Armenia’s another attempt as always failed again. No committee supported Armenia’s proposals on this issue.

Standing against Armenia’s claim, Azerbaijan’s Permanent Mission to UNESCO Anar Karimov stressed that this report was created by the Ministry of Culture in accordance with international law, the UN Charter and the corresponding UNESCO convention, and the document reflects the opinions and interviews of all the communities playing the chovgan game in Azerbaijan.