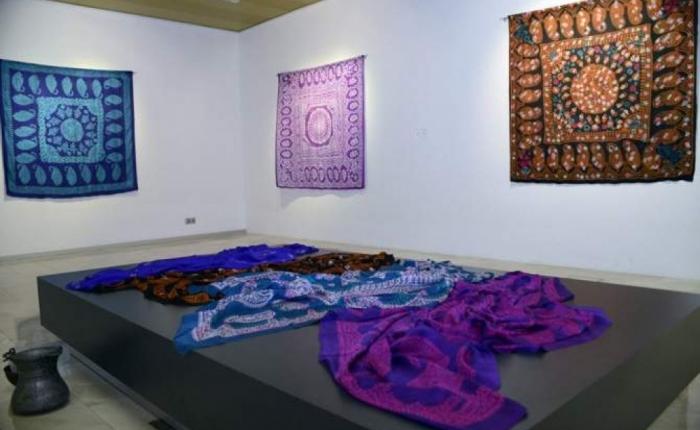 Reminding slightly of the Baku fortress, the village of Basgal pleases the eye with well-groomed streets and houses. Located 56 km from the present center of Ismayilli district, Basgal played the role of a district center until 1933. The village with an area of 60 hectares is now a state cultural and historical reserve. In honor of this village, the famous musical theme “Basgal” was created. Some episodes of the classic Azerbaijani film “On the far shores” were also filmed here. But most importantly, what Basgal is famous for is the manufacture of national silk Shawls - kalagayi, which are valued throughout the world.

"Basgal" is a Turkic word. According to Azerbaijani academician Ziya Bunyatov, it originated from the merging of the words: “bas” and “gal” and could mean “winning fortress” or “raise a fortress”.

The excavations carried out in Basgal in the 80s of the last century testify to at least a 2000-year history of these places. Basgal was also part of the ancient state - Caucasian Albania. In the southeast of Basgal, there are monuments that are traces of ancient settlements belonging to the era of antiquity and the Middle Ages. In the Basgal Cemetery, graves from at least 500 years old with ancient gravestones can still be found.

The favorable geographical location of the settlement was of political, economic and strategic importance. In the Middle Ages, a large number of fortresses and fortifications were built to protect Basgal from numerous conquerors.

The narrow streets, paved with cobblestones, and houses built of the same stones create a special atmosphere. Two-storey houses, neatly lined along the street, there are courtyards. An interesting feature of Basgal is that all the houses have fronts facing Mecca. Another distinctive feature is that since the 17th century, hamams in Basgal were arranged inside the houses. Now it is a familiar phenomenon for us, but at the time this kind of convenience was usually built in the courtyards or was completely absent, and people visited public baths.

On the first floor of a typical Basgal house there are utility rooms, the second floor is residential. In the buildings, masonry every 5-6 layers of river stone is shifted by logs. Experts call this the “seismic belt” that makes buildings resistant to earthquakes.

The population of the village is small. So, if 3,000 people lived here 20 years ago, now there are about 1,500 left. Basgal people speak a dialect of the Azerbaijani language close to Tebriz. Mixing the sounds of g, j, s, gives their speech a special sound.

Teahouse in the tree and the ancient sewage system

In the center of Basgal there is a spacious square with a magnificent panorama of the Sayad and Fit mountains and the surrounding forests.

The village has five large residential areas, the largest of which are Goshabulag and Demirchi Bazaar. The oldest residential quarter - Kalyakyucha. The prominent historical object of the Demirchi quarter of the bazaars is an old hamam dating back to the 17th century. Basgal was one of the stops on the Great Silk Road. Demirchi Bazaar still remembers trading caravans and brisk trade. Chinara (platan) grows in this residential quarter, planted in the 16th century. The tree is still alive, despite the huge cavity, gaping in its huge trunk. It is so large that at one time it housed a whole teahouse, and after that there was a hairdresser. Currently, the tree is protected by the state.

In the quarter of Demirchi Bazaar there is an old mosque, called Haji Badal (1854). In the period from 1924 to 1990, the mosque was used as a barn, but now it operates for its intended purpose.

The Al Fagir Mosque (XVII century) - the most ancient historical object of the Kalyakyucha quarter, was built in 475 AH by Al Fagir Sheikh Safai ibn Sheikh Mohammed. In Soviet times, 2 minarets and a stone inscription of a mosque were destroyed. Before the fire in 1975, the building was used as a House of Culture. Because of these misadventures, the mosque lost its original appearance.

It is worth noting that in the 12th century a sewage system was built in Basgal, which is called the kurebend. Pipes laid underground and covered with slabs carried the sewage out of the city. The system resembles a similar one in another ancient town of the Ismayilli region, Lahich, where it still functions.

In the Middle Ages, Basgal was one of the centers of crafts and silk-spinning. Basgalians claim that the residents of Sheki, also famous for its silk, adopted the art of silk weaving from them.

Archaeologist A.P. Fituni in his article “The History of the Last Capital of Shirvan” wrote: “In 1795, during the military campaign of the Persian Shah Agamagomet to Georgia, Mugan, Talysh and Shirvan, Shirvanshah Mustafa with his close relatives took refuge on Mount Fit. In the picturesque town of Basgal, located nearby, they founded a silk spinning mill.”

Until recently, almost every Basgal house operated ancient silk-spinning machines. The art of dyers, weavers, sericulture and silk-weaving was passed on from generation to generation. And the most popular silk product, of course, was Kalagayi - a national type of shawl.

Kalagayi is a traditional women's scarf, which is produced exclusively in Azerbaijan. This light head cover, weighing 125 grams, easily passes through a hole in a wedding ring.

A wonderful sample of Azerbaijani folk art - Kalagayi, was one of the main attributes of women's clothing, regardless of social status. There were Kalagayi for girls, for women of middle and old age. Kalagayi can be of different colors and sizes, and are usually decorated with floral or geometric patterns along the entire edge (Yelani) or in the center (Khoncha) of the product. Usually at the wedding they put on the bride a red Kalagayi, and preferred black scarves to mourning events. For everyday wear, women used white, cream and brown Kalagayi. The form of tying Kalagayi also mattered. So young women and girls tied a headscarf like an orpeg, and aged women tied it like a turban or dinga. Nowadays, Kalagayi can be worn, for example, as a shawl draped over shoulders, as a pareo, pancho, etc.

The most valuable were Kalagayi, which contain six or seven colors. They are still produced in Basgal.

The triumph of silk and craftsmanship

In Azerbaijan, where sericulture and silk-weaving developed from time immemorial, silk fabrics were widely used in national clothes. In the first half of the 19th century, the fame of Basgal silk products went beyond the borders of Azerbaijan. In 1862, for the first time, Azerbaijani silk was exhibited at the International Exhibition in London, where the Basgal weaver Nasir Abdulaziz was honored with a silver medal and a diploma for gentle Kalagayi and Ganovuz (a very thin bright silk fabric).

In the XIX century, journalist M.N. Lebedev-Kostromtsev, who visited the village, inspected the weaving workshops and familiarized with the difficult situation of the weavers, who nevertheless remained faithful to their craft, wrote: “We arrived in Basgal from Shamakhi on small but very fast horses. The animals understood their owner, a swarthy middle-aged man from half a word. They listened attentively and avoided all stones and other obstacles on the way, and boldly crossed a stormy mountain river. We arrived in Basgal in the evening. Oil lamps, lanterns on the verandas well lit courtyards. There was a beautiful melodic voice. The driver said that it was the voice of the muezzin, coming from the minaret, which calls everyone to the evening prayer.” The newspaper "Kavkaz" No. 310, 1882.

As we have already noted, almost until the 60s of the last century, Kalagayi was weaved in every Basgal house. After the collapse of the Soviet Union, the counters of Azerbaijan were flooded with various shawls and other women's headdresses, and the national Kalagayi went out of fashion for a while. But lately, in the wake of a renewed interest in national traditions, the Kalagayi have become relevant again. In the village of Basgal, the Basgal Silk Center has been operating for several years, where not only Kalagayi, but also other silk products are woven. The Center also has a small Kalagayi museum.

Kalagayi in this Center are made to order, and their cost depends on the number of flowers and the complexity of the ornament. Making a Kalagayi is a long process. One Kalagayi is made in 7-10 days. First, the fabric is made of silk threads and cut into the desired dimensions. Then it is painted by the traditional method in large cauldrons with boiling water, where natural plant dyes are placed. Silk fabrics are boiled so that they do not fade in the future. In fact, the fabric of the Kalagayi may wear out, but it will never lose its original color.

After dyeing, the fabric is dried, smoothed and then the process of its decoration begins. For this purpose, special stencils with different national ornaments are used, each of which has its own name and meaning. The most popular among these ornaments is the Buta.

The Buta is a pattern in the form of a drop, with a pointed and curved upper end. Something he recalls the imprint of the underside of the hand folded into a fist. Masters in Basgal assure that this is exactly the case - with the bottom of a folded palm dipped in paint, the Buta ornament was originally affixed. It is assumed that this ornament, widespread in Azerbaijan, goes back to the epoch of fire worship.

The Center has a unique interactive Kalagayi museum. Visitors to the museum can not only familiarize themselves with the history and traditions of Kalagayi, but also observe the manufacturing process and even take part in it themselves, and then save their own work with a long memory of Basgal.

Despite the vagaries of fashion, the size and shape of Kalagayi patterns remain unchanged. So, Kalagayi can be considered one of the most ancient headdress of the world, relevant at all times.