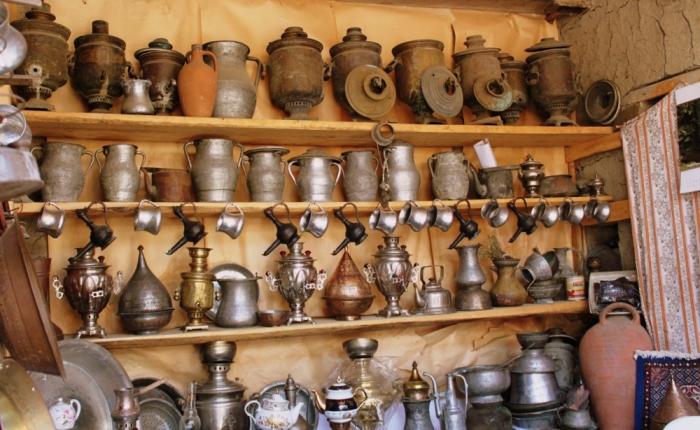 Copper craftsmanship of Lahij has been inscribed in  the UNESCO Representative List of Intangible Cultural Heritage of Humanity. Submitted by the Republic of Azerbaijan, the Lahij copper craftsmanship was included in the list at the 10th session of the Intergovernmental Committee for the safeguarding of intangible cultural heritage in the Namibian capital of Windhoek.

The Lahij copper craftsmanship is centred in the settlement of Lahij only (mostly in the Ağalı district of the settlement, also referred to as “Misgar bazari”). Lahij settlement is located in the Ismayilli region, on the left bank of the Gyrdmanchay River, at the altitude of 1375 metres. The settlement is located on the southern slopes of the Greater Caucasus. Administratively, Lahij settlement (officially – ‘urban-type settlement’) has its own municipality as a self-authority entity. The larger community of people using the copperware in daily life is scattered in many regions of the Republic of Azerbaijan.

Concentrated in one of historical centres of traditional craftsmanship in the Caucasus, copper craftsmanship (misgerlik) of Lahij is a traditional practice of making and using copperware, while applying skills of traditional metalwork and knowledge about its use in everyday life. For Lahij copper masters, the process of making copperware consists of several stages: buying copper from local copper-producing wholesalers (or recycling), managing the making process and selling final copperware directly from their workshops (‘misgerkhana’). The process of copperware making in Lahij (depending on the types of copperware) generally consists in smelting the copper, shaping copper sheets, soldering and polishing. The most important final stage requires most of masters’ time and effort and consists in ornamental decorative engraving of the polished copperware with different vegetative patterns reflecting craftsmen’s traditional views and knowledge about their environment and cultural values. Various methods, techniques, substances, fuels and instruments are used by Lahij copper craftsmen and their apprentices.

Outside the Republic of Azerbaijan, traditional copper craftsmanship exists in various forms and expressions in many countries, ranging from Europe to Middle East and Asia.

The traditional copper craftsmanship of Lahij reinforces the feeling of cultural identity of many Azerbaijani-speaking communities living abroad, as a profound symbol of their cultural roots.