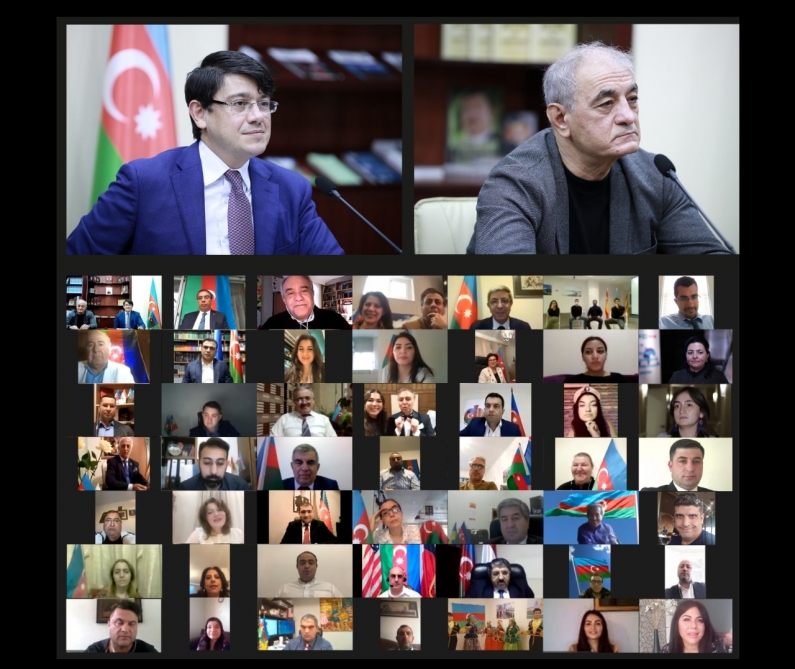 The State Committee on Work with Diaspora organized a virtual meeting called "Let's unite, let's support Karabakh!" with the participation of Azerbaijanis around the world on the occasion of the State Flag Day.

The meeting, attended by more than 100 of our compatriots from 49 countries, began with the National Anthem of the Republic of Azerbaijan, followed by a minute of silence in memory of our martyrs.

Chairman of the Committee Fuad Muradov delivered the opinion of President Ilham Aliyev: “Today, the national flag is waved everywhere in Azerbaijan. After the restoration of Azerbaijan's territorial integrity, our national flag will be raised in the occupied territories” to the attention and congratulated each of our compatriots on the National Flag Day.

The chairman of the committee spoke about the just struggle of the Azerbaijani state for the liberation of our occupied lands, the unparalleled services of the Supreme Commander-in-Chief and the success of our brave army and thanked the Azerbaijani diaspora organizations and members of the diaspora for their great determination to convey the truth to the international community, providing humanitarian assistance to our army and civilians, and called on our compatriots to be careful against Armenian provocations.

People's Artist Fakhraddin Manafov, who visited the Committee, our great artist living in Turkey Jahangir Novruzov, the head of the Hatay Azerbaijan House Bashar Komur and other guests expressed their pride for the unity of Azerbaijanis around the world and expressed their gratitude to the Supreme Commander-in-Chief, who raised the prestige of Azerbaijan in the world with his intelligence and political will, and to our Army, which brought joy to our people.

Interesting videos reflecting the rallies of world Azerbaijanis in support of Karabakh, the "Soldier's March" performed by the famous Manafzade family living in Turkey, the performance of the children's group "Karabakh" in Sweden enriched the emotional spirit of the world Azerbaijanis.

Our compatriots, who have always united for Karabakh and have written history with our unity, ended the meeting with this magnificent view by waving our tricolor flag in their hands.