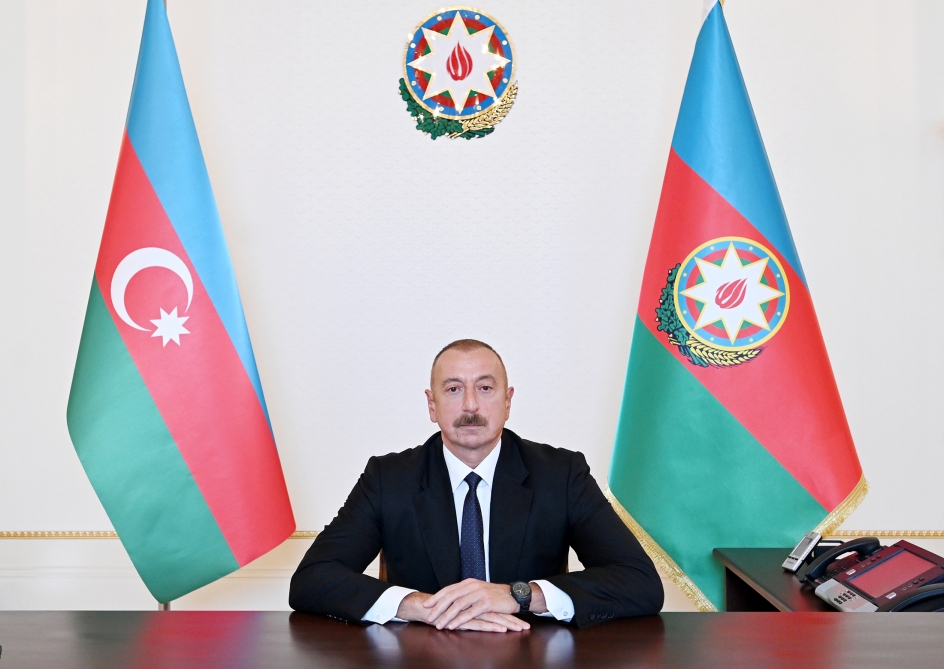 President Ilham Aliyev: “The Minsk Group co-chairs United States, Russia and France, their presidents many times made the statements that the status quo is unacceptable. Armenia ignored it, but now Azerbaijan itself is changing the status quo”

On October 7th, President of the Republic of Azerbaijan Ilham Aliyev has been interviewed by Euronews television.

- Joining us now is the President of Azerbaijan Ilham Aliyev. Thank you for your time. There has been strong and repeated international pressure for a ceasefire and to de-escalate tensions. Fighting is ongoing, if not escalating. What is your objective now in the conflict?

- Ceasefire cannot be achieved unilaterally. It must be a bilateral decision and also it must be implemented on the ground. As you know Armenia attacked us on the 27th of September, attacking our military positions and damaging our infrastructure, attacking civilians. So far we have almost 30 civilians killed as a result of Armenian attack, including the ballistic missiles, and the cluster bombs. So, our counter-attack was successful. We managed to liberate part of the occupied territories and our main objective is restoration of territorial integrity of Azerbaijan. Armenia must give us the time-table for withdrawal of their troops from the occupied territories and this time-table must be approved by the Minsk group co-chairs, the countries which are mediators. And after that I think the effort must be imposed on achieving the ceasefire.

- The countries that you’re referencing have repeatedly asked for a ceasefire. Why isn’t that happening now? Why aren’t you pushing for that to happen immediately?

- Because we have been a subject of attack for many times. During the last three months there have been three attacks on Azerbaijan. One in July, on the border between Armenia and Azerbaijan, far away from the region of Nagorno-Karabakh. The goal of Armenia was to occupy new territories of Azerbaijan. They did not manage to do it. Our army defeated them. Then, on August 23, they send a sabotage group to commit terror acts against our civilians and military personnel. That also was a failure for them, because the head of the sabotage group was detained and he gives evidences exactly about what I am saying. And in the end of September they launched a massive attack on our villages and cities. I can tell you that up to today we have almost 900 houses totally demolished, or damaged and many casualties and wounded people among civilians. And now after Armenia is suffering a very bitter defeat, they are pleading for a ceasefire. They made violation of ceasefire themselves. They ignore United Nations Security Council resolutions which demand full, complete, immediate and unconditional withdrawal of Armenian troops. They want to keep status quo unchanged, and the Minsk Group co-chairs United States, Russia and France, their presidents many times made the statements that the status quo is unacceptable. Armenia ignored it, but now Azerbaijan itself is changing the status quo, and I think that will be an important step towards the soonest resolution of the conflict.

- Mr. President, civilians have been killed on both sides of this conflict. How do you reconcile that with your aims?

- Of course, we regret that civilians are being killed and of course, we were not the purpose, we were not the source of this attack. Because it was a first thing in the morning on the 27th of September, what they did, they attacked our cities and villages. And we had to respond. But our response mainly is and primarily is on their military positions, on their tanks and guns and what we are doing on the battlefield is available in internet. Our drones and our other equipment demolished only military objectives on the occupied territories. Unfortunately, Armenia is using civilians in order to have more people on the ground, because their demographic situation is very bad, and we have video about these civilians being just next to the guns, and of course…

- I’m sorry to interject Mr. President, that civilians on their side have been killed in this fighting and they would dispute exactly why it was on the 27th of September this violence flared up again. Let me bring you to a promise that your foreign minister made last year that said it was necessary to take concrete measures to prepare the populations for peace. What we are seeing right now is the opposite of that. How are you trying to limit the suffering of civilians?

- You know we are not responsible for this outbreak. As I said, we were a subject of a physical attack from Armenian army which is situated on the occupied territories of Azerbaijan Above from that, the current Armenian regime did everything in order to destroy the negotiation process. Exactly one year ago, Armenian prime Minister at the rally in the occupied area of Azerbaijan made a statement that ‘Karabakh is Armenia’ and that statement actually destroyed negotiation process. Because the principles which are on the table and which are the basis for settlement demand the return of the occupied territories to Azerbaijan. And when Armenian prime minister says that not a centimeter of land will return to Azerbaijan, when he says that ‘Karabakh is Armenia’, when they organize illegal settlement of foreign people on the occupied territories which is a brutal violation of Geneva Convention, they destroy negotiation process. After that, in order to make us responsible for that, they attack us three times-on July, August, and September. When we beat them on the battlefield, they call everywhere, they make a plea to everyone, ‘stop Azerbaijan’. We want to stop, but we want the occupation to stop. Therefore, the main message should be to Armenia, we are not on Armenian land, we are on our land. Our land for 27 years…

- One thing that Armenia will say is that Turkey is really providing quite a strong influence, including supplying things like military aid. To what extent would you say Turkey are accelerating and pushing your country and your actions in this conflict?

- This is absolutely false information. Turkey for us is a strong ally, partner and brotherly country, and of course the statements expressed their position and we are very grateful to Turkish government, to Turkish President, Turkish people for this support. But Turkey in no other way is involved in this conflict. Armenia bringing such fake news to the media wants to diminish the capacity of Azerbaijani army. We are fighting ourselves. Yes, we purchased weapons from Turkey, but not only. Our main supplier of weapons is not Turkey. And probably everybody knows about that. So, the fact that we buy modern Turkish equipment including the fighter drones should not be a problem for anyone. Because Armenia gets weapons free of charge. We pay for them and Armenia gets free of charge. Turkey in no other way is involved in the conflict.

- I can tell you, that during my term as the president, I had maybe tens of talks with two former Armenian presidents and the current prime minister. During those previous debates we made a substantial progress on negotiation table. We elaborated the principles which today are the basis for the settlement of conflict. And we were constructive. Negotiations are taking place since 1992. Can you imagine? For almost 30 years. And we were living with hopes, mediators were telling us that you should wait a little bit, there will be more constructive approach from Armenian side. But when this prime minister came to power, as a result of the coup d’état two years ago, he destroyed completely negotiation process. And I had meetings with him many times. But these meetings were absolutely senseless. And he told me that they are not going to give the territories back, they told me that Nagorno-Karabakh must be, how to say, adjusted to Armenia. So this is absolutely unacceptable demand on me, and also unacceptable for mediators. Armenian government should change their position, should refrain from maximalist position, should stop telling that Karabakh is Armenia because this is not true and this is destroying negotiations process and of course, we are going back. By the way, tomorrow, our foreign minister will be in Geneva, meeting with the ambassadors of the Minsk Group. And as far as I know, Armenian foreign minister was supposed to go there in the beginning of the month, but he ignored that. He is not there. Our foreign minister is there. It shows who wants negotiations and who wants just accusations against Azerbaijan.

- President Aliyev, thank you for joining us on this special program on Euronews. Thank you very much for your time. 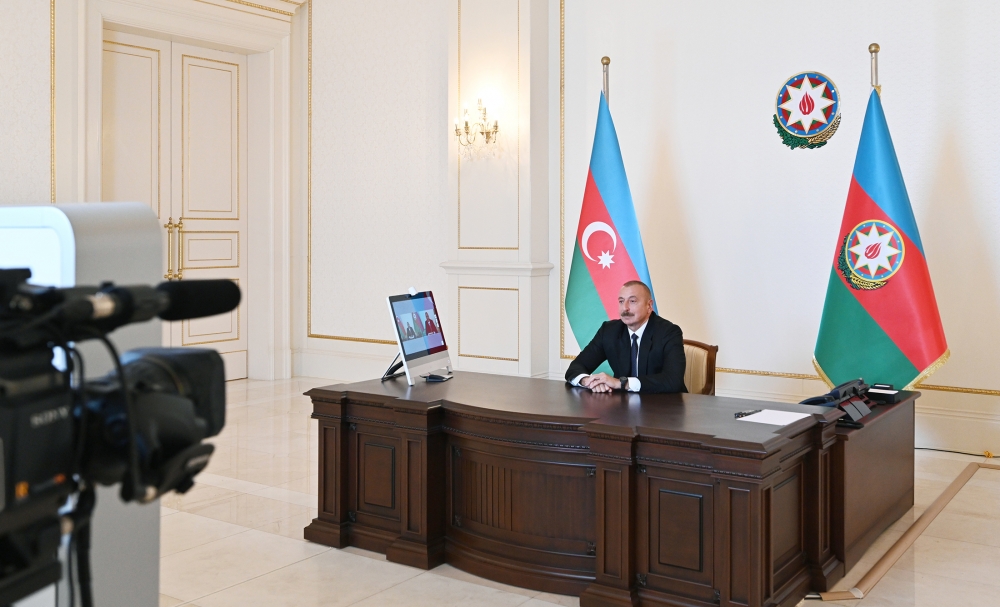